“Do not go gentle into that good night, Old age should burn and rave at close of day. Rage, rage against the dying of the light.”

I waited more than a year for this movie and it didn’t disappoint!

Normally, I write about entrepreneurship, management, speaking skills, among other things; but this movie deserves recognition, as it incorporates real science as the foundation. Before I begin, I’d like to mention that the movie does have it’s flaws; But the experience of having seen such a concept that was so well imagined and researched intensively, on the big screen was simply surreal.

Take a look at the trailer just so you acknowledge the gravity of the awesomeness of the movie (pun intended).

That being said, here are the points I would like to enunciate so that you don’t have to spend a fortune to watch the movie again in IMAX to understand it –

1. Drinking beer even when wheat produce is massively low.

They were growing corn, remember? You can make beer out of corn too.

In fact, there is no question at all really. Let’s say a person, A, who started his life at time, T1, became a successful businessman, moving ahead, and thus reaching a point of time, T2. If after T2, this person, A, found a way to communicate with himself, who still is at time, T1, he would let himself in on the secrets of becoming a highly successful businessman. Now, does it make sense to ask the question “How did future ‘A’ know the secret?” ? – No, it does not. Maybe that’s exactly how  ‘A’  learned the secret in the first place.

But, this “parallel universe” theory is not being used in Interstellar. According to the story, the loop was always there.

Anne Hathaway rants about how love is not just any feeling; it’s a feeling that can actually be quantified. Honest to God, at the time I was extremely confused because she totally changed character. She was all about completing the mission and getting to achieve plan A. All of a sudden, she pours out her heart to Cooper. More importantly, I thought it was completely unnecessary. Nolan isn’t a guy who makes romantic movies.  But, I came home later that day and sat thinking about the movie. And like all Nolan movies, I like how he makes everyone think about stuff.

And then, it hit me!

When Cooper was inside the black hole, he stumbled upon the Tesseract – A representation of 5 dimensions in 3 dimensions, so that Cooper would understand the world of the advanced future humans. He conveniently was inside Murphy’s room and it was easy for him to communicate with her via the gravity.

BUT, it was that LOVE for Murphy which led the tesseract to take Cooper to Murphy’s room in the first place. If I had somehow found my way into the tesseract, I would’ve probably seen my college because my love for the college was quantified and applied in the gravity equation, and that’s how I ended up back at my college, but through another dimension JUST like how Cooper went to Murphy’s room.

What we fail to understand is that Anne Hathaway’s rant about love is actually a very important element in how the science of the movie works.

4. What was the problem the professor was trying to solve? How did it get solved?

Plan A was to solve gravity’s equation based on data from the inside of a black hole. How would it actually allow them to transport humans to another planet?

Humans need gravity to survive. The gravitational force on earth lends strength to bones and muscles. If there was zero gravity, our bones would be very weak- see what I am getting at? To travel through to the farthest reaches of space, the human body has to endure. This is impossible. Humans, as we know it cannot endure incredibly long stretches of space-travel. Ladies and gentlemen, and thus the problem of gravity. Professor Brand ( Michael Caine ), when he sent the team to find a potential earth, knew he could not solve the problem of gravity without extra quantum data that could only be obtained by getting dangerously close to the singularity of a black-hole.

But in the end, Cooper does get more than just close. TARS and Cooper get inside one and TARS gets all the data about the black hole (because he’s a robot designed to detect and record anomalies) and as Cooper and TARS are in constant communication in the black hole (or the tesseract.), he transmitted all the data required for plan A to happen, and encoded it in a watch.

Inside the black hole, love, that like gravity can move across dimensions and provide a connection between a person who is at two different points in time along the length of his/her life, manifests itself in the form of a time maze or the labyrinth of books that we see in the movie. In the labyrinth, because the quantified connection, love existed between Cooper and Murph, Cooper was able to interact with Murph at different instances of her life, more specifically with both past and present Murph. He did so using gravity. He also successfully relayed the quantum data from where he was in Morse code, using the watch.

5. “Do not go gentle into that good night, Old age should burn and rave at close of day. Rage, rage against the dying of the light.”

What does the quote mean, for those of you who are wondering? Of course, as with every piece of literature, this is subject to multiple interpretations, but here’s mine:

“Do not go gentle into that good night” is to say that when we are about to face perpetual darkness, which is when you are on the brink of death or at the end of something big and facing old age or a point in discovering something big that you know is close to the end, we should be sure that we’ve always been trying to achieve what we set out to achieve, even in the end stages. ( “Old age should burn and rave at close of day. Rage, rage against the dying of the light.”)

Now, let’s talk about some flaws.

The movie is set in a world where each man is making his own produce just so he is able to bring food on the table. The market has completely collapsed and so has trade. It’s literally every man for himself, etching out a living out of the last remaining natural resources for himself and his family. Realistically thinking, could that ever happen? Granted, we are depleting earths resources at an alarmingly speedy rate at the present time but are world leaders not actively working together to come out with environment and resource friendly solutions to the challenges we face, also? Given the investment in the whole “clean up the earth” thing and the large scale marketing and awareness campaigns, the logical deduction would be that at some point in future we would find a way to sustain almost the same pace of development without compromising, in large quantities, earths natural resources. I mean if anything, a thermonuclear war among the major nuclear powers could prematurely plunge the earth into an ice age, before the carbon dioxide concentration ever gets a chance to. 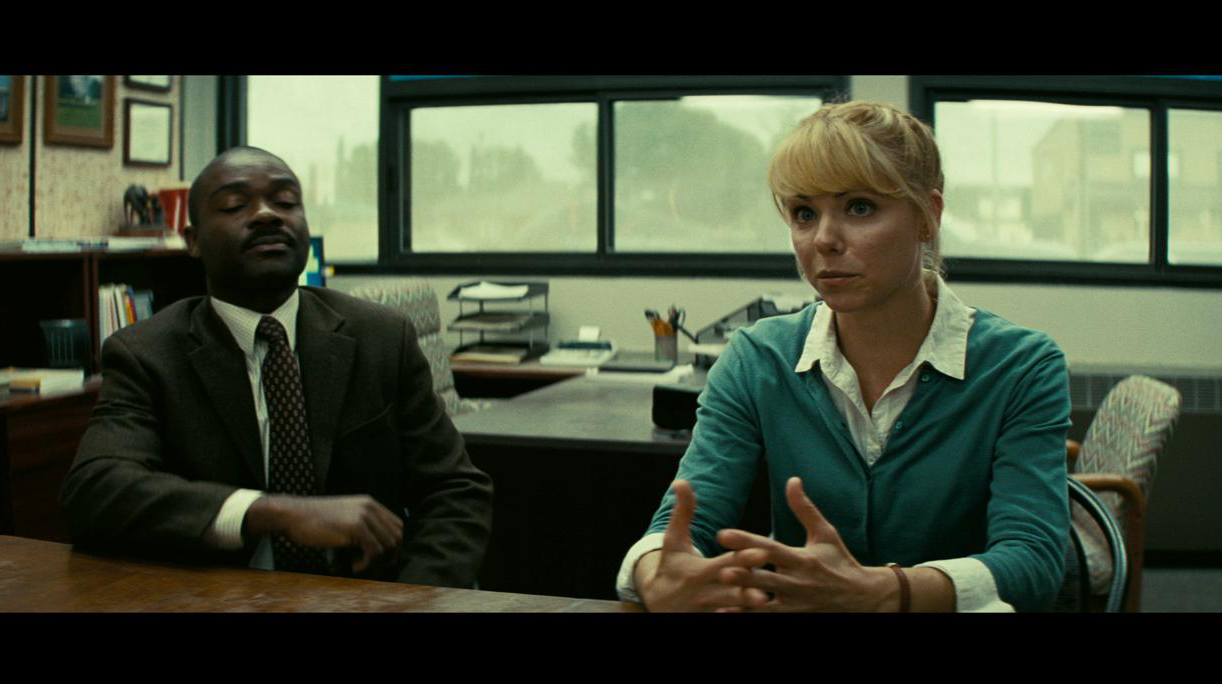 In a world where mere human existence hangs by a thread, that thread being the last few of earths resources, should it matter how well a child does in school? The only vocation for anyone to choose would be something that helps keep the population afloat for a little while longer. That being the case, farming or some small scale manufacturing should be the only two choices for a vocation. In a world like that, even having schools, much less parent teacher meetings with proper student evaluations, would become unnecessary. Rather, there should be specialized institutions that only develop a person’s manufacturing skills or skills to make some kind of produce out of some resource for himself/herself. Hey, Nolan. I love you man but I have to ask – ever heard of terraforming? For those of you who are unfamiliar, scientists across the world are actively involved in terraforming the surface of mars so as to make it habitable. Long story short, terraforming is making another cosmic body that is currently thought to be uninhabitable, more like earth so that it can sustain human life. Scores of scientists believe that this mission will see a reasonable amount of success in the foreseeable future. You will also find, there is enough data out there to back this claim.
Tell me more about Terra-forming

Now, as with all potential scientific breakthroughs, the terraforming mission does come with it’s share of hurdles. The link can tell you more about these hurdles. Regardless, even if there is a person out there who decided to make a movie on a whole other premise and if the movie’s imagined setting is going to talk about getting through the end stages of mankind’s existence on earth ( Science does welcome constructive criticism and it wouldn’t be the first time that scientists have been in conflict over a theory or hypothesis ). Isn’t it appalling that it should completely neglect to explain why other possible solutions were ruled out at that point?

9.Wormhole next to Saturn?

A wormhole, as far as we understand it, would collapse too quickly for anything to cross from one end to the other. Wormholes that could be crossed in both directions, known as traversable wormholes, would only be possible if exotic matter with negative energy density could be used to stabilize them. There isn’t a point within the planetary solar system that could generate this negative energy causing enough density to make a wormhole stable and traversable.

With whatever information we have, we have to just assume either of the two things-

One, is that the future humans didn’t have enough resources to put the wormhole a little closer to earth. A lot of time would’ve been saved if the wormhole had been near Mars instead.

Second, is that maybe the space around Saturn somehow supports the existence of a traversable wormhole.

Dr. Brand ( Michael Caine ) looked much the same and barely aged over a span of more than twenty years until suddenly, one day he croaked. What?! It’s probably just a minor directional flaw but this aspect should have received  a little more attention, because people notice all this.

This post is the brainchild of both me and Kunal Roy. You cannot imagine the amount of time we spent just brainstorming about the science and the plot of the movie! That’s what I love about the Nolan brothers. They make you think a little after watching their movies.

Finally, We would love to know your thoughts. Please leave a comment below, and do subscribe for more intriguing posts.